To generate a UML class diagram from XSD file you can use this action:

Using the General tab in the XSD Import dialog you can choose XSD files (Add Files button) or the entire folders with XSD files (Add Directory button) and transform them into UML models and UML diagrams. The tab also offers the buttons (Select All, None, Invert) that allow you to quickly adjust the selection of the items which will be further processed during the reverse engineering process.

The Settings tab contains two groups Diagramming and Model. If the 'Add new elements to diagram' option is checked, UML diagrams will be generated for the XSD schemas. You can choose the project folder where the generated diagrams should be placed using the Target folder field.

The Model group allows you to choose where the model should be imported. It can be placed into the default project repository or into any chosen repository (choose the Custom repository option and click on the ellipsis button). 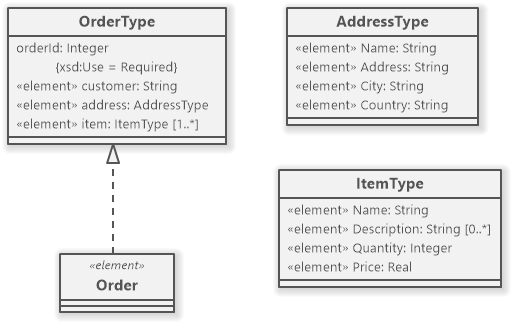