Diagrams|UML| 15 July 2014 8:51:38 Dusan Rodina - softwareideas.net
Activity diagram is a behavior diagram, which shows a scenario using a flow of actions. It models a sequence of actions, decisions based on conditions, concurrent branches and various cycles.

Activity describes behavior using flow of actions. It can also consist of another subactivities. Activity can be the invocation of an operation, a step in a business process, an entire business process.

A single atomic step of flow, which cannot be broken nor divided.

An object flow connects an action with an object (or with a pin).

A pin represents an object. It is attached to an action. A flow of objects between actions is described using an object flow relationship.

It is a starting node of the modeled activity flow.

It terminates flows which arrives to this node.

It terminates all flows in an activity. Activity diagram can contain multiple nodes of this kind. The first reached activity final node stops the whole activity. 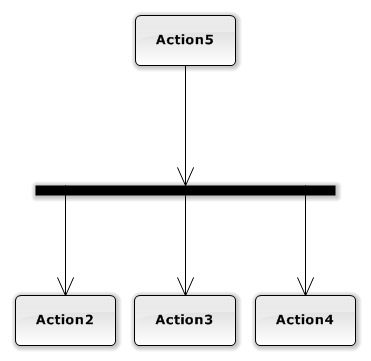 Join element combines multiple incoming asynchronous flows into one outcoming flow. It stops processing until all incoming flows are completed. 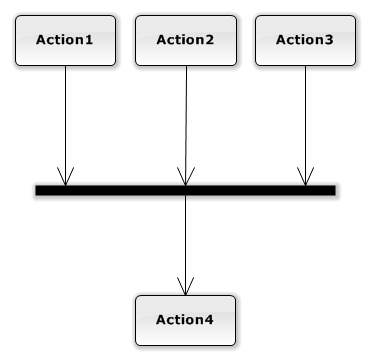 Decision element creates multiple alternative branches of the flow. Conditions in control flows decide which flow will be used. Only one outgoing flow can be used. 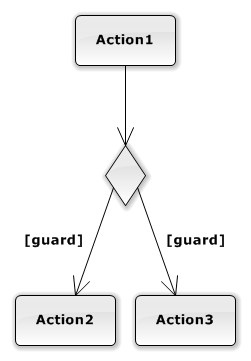 Merge element combines alternative incoming flows into the single one. Do not confuse this with Join element. Merge is not used for synchronization of concurrent flows. 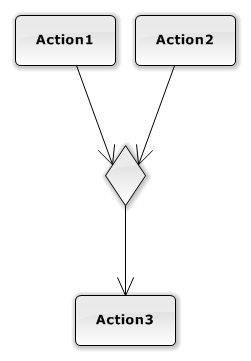 This action node invokes an asynchronous event in a target object or a process.

This action node receives an asynchronous message from an object or a process.

This node represents a source of periodically generated outputs. This action is called each defined unit of time and continues with a defined flow.

It represents an area of diagram which can be left by an event. This interrupting event is modeled using an exception handler relationship (a flashlightning line).